As Evil Increases, What Is Our Response?

“And because lawlessness will abound, the love of many will grow cold.”
– Jesus in Matt 24:12

One of Equip’s ministries is providing teaching and discipleship in Masese slum.  Michelle (my wife) participates in a women’s Bible study there each week.  Masese can be a difficult place in teaching and discipling people in the Gospel because so much lawlessness can exist in this community at times – abuse, drunkenness, rape, theft, prostitution, poverty, anger, selfishness, murder, etc. 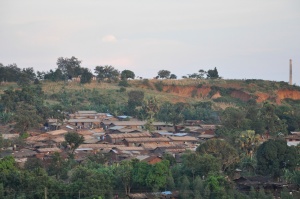 The Community of Masese Outside Jinja, Uganda

Resting in the Shadows

The following story from 2 1/2 years ago illustrates the initial challenges our friends and fellow Equip teammates, Jeremy & Tamara Boone, had as they began work there.  This story is from their blog.   “I remember a man who came to Jinja from his distant home in Karimoja to stay with his sister.  He had advanced TB and was near to death.  The family didn’t want him to sleep in the house and basically refused to touch him.  As a result, he spent his days and nights laying lifelessly on a blanket in the shade of a tree.  He was unwashed and unable to eat or help himself to a latrine.  I got involved and told the family that there was free TB treatment available at the local government hospital.  I charged her, “If you will just get him to the hospital, I’ll make sure the doctors and nurses give him the treatment he needs”.   She agreed to the plan but because of the families negligence and his critical condition, I decided to return to their home the next day and make sure he had gone.  That night, I fell sick with Malaria.  It was 2 weeks before I returned.  The first thing I did was go to their home.  I found a freshly dug grave covered with stones behind their hut.  Neighbors came and told me that the sister had refused to take him to the hospital.  Instead, she stuck him in the chicken house so she didn’t have to watch him die.  Their home and the chicken house is directly across from the (local) church.  Everyone saw him dying.  No one acted. I was outraged and discouraged.” – used with permission from www.boonesinafrica.com.

Just to clarify, please understand part of the ministry in Jinja is to teach, disciple, and encourage the people to love and take care of their own, not just do it for them, although at times Equip does that as well.  There is a ministry, Amazima, now in Masese that checks at least twice a week on Masese community members.

Jesus said, “Because lawlessness will abound, the love of many will grow cold.”

Notice carefully in that prophecy, there is encouragement – Jesus said the love of many (implying, not all) would have their love grow cold.  So in striking contrast to the “many,” the followers of Jesus (apparently the few) are to love.

It would seem that the clear answer to increased lawlessness is either more law or better implementation of the law.  But that is not the way to look at it.  Notice that the writer of Hebrews encourages us to be stirring up one another in love and good works, and so much more as we see the Day approaching (Heb 10:24).  This is my desire in this post, to stir us up as Christians to love and good works in the midst of increasing lawlessness.

This stirring one another can happen in various ways, but most effectively in the following two ways (I plan to post a third way later): 1) Go to the source, God’s heart; and 2) Resist the temptation to put law in place of love.

We are constantly hearing more and more about lawlessness and sin.  I had a lady write me a few months ago from the States who was so discouraged about the paths people are taking and the way the world is going.  It seems to be a losing battle and we can be negatively affected by the cold air of lawlessness.

The reality is, the truth is, as lawlessness increases, we cannot fight this battle on our own strength.  When we are weak, many will move into to a self-protective mode and demand more laws and security from our governments.  Others will cry for more obedience to God’s laws – those perfect, unmoving, secure and stabilizing decrees, which are God’s holy righteous standard.  This is not the right move.  The right move is to know God’s heart and spend time with Him each day.

God’s heart does not delight in the death of wicked sinners. Even the Old Testament prophet Ezekiel records God’s Spirit moving him to write, “I (God) have no pleasure in the death of the wicked” (Ezek 33:11). Rather as illustrated graphically by the prophet Isaiah, when we think God has forsaken His people and forgotten us because of the abounding of lawlessness and evil, God tells Isaiah to tell His children, “Can a woman forget her nursing child, and not have compassion on the son of her womb? Surely they may forget, yet I will not forget you. Behold (an expression of surprise! Look, examine, what God is about to say is extremely important) I have inscribed you on the palms of My hands” (Isaiah 49:15-16). He has taken us – sinners – and as a sculptor chisels the law into stone, our awesome God has chiseled our sins into the palms of His nail-scarred hands on the cross through the love of His Son, Jesus Christ.

If this is not enough God further reveals His heart to His people through the prophet Jeremiah in Lamentations as they suffer and lament their pain, affliction, and discipline, “Though He causes grief, yet will He show compassion according to the multitude of His mercies, for He does not afflict willingly.” The Hebrew for “willingly” means, “from the heart” (Lam 3:32-33). At God’s heart is not affliction and judgment, but compassion – the very fulfillment of the law found in Jesus Christ Himself compassionately living amongst sinners, serving and loving them.  God doesn’t do away with the law, but fulfills His perfect law with love.

This leads us to the second point:  resist the temptation to put law in place of love.  As I wrote above, the natural inclination is to fight lawlessness with more laws or better implementation of laws.  That does not work.  If God’s heart was His law, He never would have sent His Son Jesus!  He would have held to His law and let it condemn sinners.  God rescued sinners by sending His Son.

God gave the law, and then He gave us His very best – His Son – who fulfilled the law and took on our sins.  If we reject God’s gift of love, His very best and very own Son, Jesus Himself says the result is condemnation (John 3:16-21).

I am greatly concerned that as things in this world get more and more lawless and evil, that we Christians will start moving toward the form of worship of God through the law. That is, starting from the point of keeping the law in attempts to merit good is not love!  Rather it is selfishness and pride.  One must start from Jesus (God’s full expression of love) in order to fulfill the law – namely loving your neighbor and loving God.  Love through the power and person of Jesus Christ and His Spirit, that fulfills the law.  That’s why it’s important to spend time with God each day – to strengthen and grow from the source of Love.

16For God so loved the world that He gave His only begotten Son, that whoever believes in Him should not perish but have everlasting life.
17For God did not send His Son into the world to condemn the world, but that the world through Him might be saved.
18“He who believes in Him is not condemned; but he who does not believe is condemned already, because he has not believed in the name of the only begotten Son of God.
19And this is the condemnation, that the light has come into the world, and men loved darkness rather than light, because their deeds were evil.
20For everyone practicing evil hates the light and does not come to the light, lest his deeds should be exposed.
21But he who does the truth comes to the light, that his deeds may be clearly seen, that they have been done in God.” – Jesus (John 3:16-21)

The answer to lawlessness and evil is not more law, not more morality, not more “spirituality.”  The answer is the love of Jesus Christ, the fulfillment of God’s law found in Him, the light, life and truth. His commandment is love.  He is love.  He is the source of our strength, not the law, not morality.  He will not fail us. When the Light comes into our hearts, change takes place and love eventually conquers all, beginning first with us.

4 responses to “As Evil Increases, What Is Our Response?”