Two accidents this week which happened around me/us:

Direct hit to our friend’s door on the driver’s side. Remember driver’s side of the car is on the right in Uganda.

1. Sunday night after a home Bible study, we were driving home with a missionary friend, his wife, family and 3 interns packed in his car following us in the dark.  They were T-boned in the driver’s side of their car.  The driver, which was the husband / father, had only minor injuries, which Michelle was able to assist with and provide some simple nursing care (thanks to MMI training).  No one else in the vehicle or the other vehicle was hurt, just a bit sore.  Thank the Lord our Bible study group had just prayed for God’s protection.  Something that could have been much more tragic resulted in only very minor injuries. A 3-year old son, who was in the car during the accident, said right after it happened, “God was in between our car and their car.” He is so right.  The car has since been repaired.

2. Then today (Thursday morning here about 9 am) in Jinja on busy Main Street, the same missionary was with me when a boda boda (motorcycle) driver was hit by a van.  I witnessed the entire accident.  I was shocked as I heard the awful crunch and saw the man on the boda thrown to the ground mercilessly.  We ran over to help with such a heavy heart for this man.  I can still hear the sound of the impact.  I wanted to do something, but felt helpless.  As I arrived, the van took off (otherwise the driver of the van would probably have been beaten badly or killed by the crowd) and a fellow boda driver picked up the injured man and carried him to the sidewalk.  I squatted by the man, placed my hand on his shoulder and prayed for him.  He sat dazed and bloody with a long, large, deep gash in his right leg, blood on his forehead, shoulders and other parts of his body.  I then realized a very large crowd was gathering while men (and one Muslim man in particular) were yelling in Luganda (which is normal after an accident here).  I began to feel unsafe.  I noticed the fellow missionary with more experience standing at a little safer distance watching.  I thought, “I better leave.”  I joined my friend and we recounted the experience.   The boda drivers picked the dazed and injured man up and put him on a boda and drove him to the hospital. 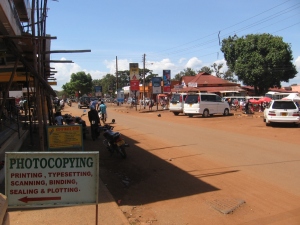 A snapshot of Main Street, downtown Jinja. The accident on July 11th happened just in the distance of the photo (left side), about a 1/2 block away. Photo was taken during a quiet time on the street. It’s normally much busier.

Bodas are everywhere in Jinja, hundreds of them weaving in and out of traffic.  Boda accidents happen all too often here.  This man, like the majority, do not wear helmets.

Once again, I found myself feeling helpless, so helpless, and wondering what to do in such a difficult situation, similar to the situation of the girl on the bus who had a seizure (see my previous blog entitled, Do You Ever Want More? June 16, 2013).  I thought of the driver often throughout the day today and prayed for him.  I hope and pray he will be fine.  Life is so fragile and comes at us unexpectedly.  Thanks for your prayers, especially this week!

UPDATE (Friday, July 12):  Friday afternoon I went to Jinja Main Hospital to visit the boda driver.  He was in the same ward and the same area as Musisi, the man I visited and witnessed to when we were here 3 years ago.  3 years ago, Musisi accepted Jesus as his Savior.

Today, I found out the boda driver in the accident yesterday is part of another religion, too.  I met him and found out his name.  He does not speak very much English at all.  His family was there to support him and his wife just kept smiling at me.  They really enjoyed it when I was able to speak just a little Lugandan to them.  People generally see it as a sign of respect when a white person tries to speak their language.  I was able to let the boda driver know I witnessed the accident, was concerned for him and prayed for him.  At first he seemed resistant to my visit, but he warmed up as time went on.  His brother translated for me as we chatted.

I won’t go into a lot of detail, though I would like to.  By God’s grace I was able to talk, pray and it seemed the Lord’s Spirit encouraged him. I shared that Jesus was the reason I came, that Jesus changed my life and asked him to thank Jesus, not me.  I told him a couple times that Jesus loved him and that’s why I was there.  By the end of the conversation, he was opening up and seemed happy that I came.  His wife was very appreciative of the visit, and just kept smiling.  I just wanted to hug her as it seemed we connected.  She was holding a baby.  I hope to visit more and talk to him further.  He is supposed to be in the hospital for about another week.  Please pray for him.  His roommate is an older Protestant gentleman.  Families in the hospital here support one another openly.

As I was leaving the hospital, walking across the compound, I was encouraged.  However in the distance I heard the wailing of a girl.  As I approached a large truck on the way to my vehicle, a girl was in the back of the truck loudly crying and being consoled by a person who seemed like her mother.  A group of about 10 men were standing in a circle in a serious discussion.  Not sure what was going on.  So many needs.  So much hurt, pain and oppression.  The world needs Jesus – not religion, not legalism, and not for you and me to remain quiet.  They need to know He loves them and gave Himself for them.  When that happens, the world changes.  People watch and listen when they are in need.  May Jesus cause us to share His love more and more.  Let’s go!  And make disciples.

UPDATE #2 (Saturday, July 13): I visited the boda driver (we’ll call him William) again this morning at the hospital.  This time I took along a young man, Andrew Olson, from Minnesota who is here doing Bible Translation.  “William” was much more receptive today.  He sat up when we arrived.  His roommate’s spouse said “William” was vomiting this morning, maybe from a concussion.

Andrew was able to read from Psalms 23 and James 5:14 out of the Lugandan Bible.  William was receptive.  I was able to pray for William, and Andrew anointed him.  William’s roommate’s spouse asked that we pray for them, which Andrew did.  Then another person came from across the hall and asked us to pray for his son John, 21, who was in a vehicle accident.  We did and Andrew anointed him.  Then a man who was the roommate to the 21 year old, asked for us to pray with him.  We did and anointed him, too.

People here are not only receptive and open to prayer, but request it of people who are visiting others.  Their hope is still in the Lord for healing.   Here in Uganda, people desire prayer.  They are not embarrassed, ashamed or consider it a “private” matter.  They are desperate, yet sincere and openly appreciative of it, with smiles and warm handshakes.

One response to “Two Accidents This Week!”