Feeling Weak? Go to the Source of Your Strength

The source (beginning) of the Nile River is just a few minutes from where we stay here outside Jinja.

Mark standing at Bujagali Falls on the Nile River, just a few miles north of the Nile’s source, Lake Victoria.

The Nile is a powerful river that flows more than 1,600 miles north from Uganda through Sudan and Egypt to the Mediterranean Sea.  The river is deep, wide and long.

Anna Poindexter, a single young lady from Colorado mentioned at our home church gathering this afternoon how she was standing by the mighty Nile when the Spirit brought to her mind how God’s love is like the Nile – deep, wide, and long with a continuous, unending source.  She asked, “Where does that water come from?”

She’s right.  Paul writes to the Ephesians in 1:7-8 In (Jesus) we have redemption through His blood, the forgiveness of sins, according to the riches of His grace 8which He made to abound toward us in all wisdom and prudence..”

Grace in and of itself is…well…gracious.  But notice the words, “riches” and “abound.”  When I think of riches I think back to my childhood when I read comic books, especially the unlimited supply of wealth like Scrooge McDuck (Donald Duck’s uncle) had in the rooms in his house and swimming pool. 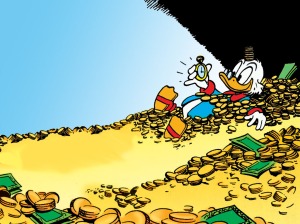 The idea of riches comes from my childhood days when I read comic books. Used legally from Free ClipArt.

Remember those pictures?  The coins and money were literally piled in his pool like water and filled his rooms.  God is so rich and He wants to share His wealth!  His riches are not just shared with us, they abound – plenteous and copious amounts!

As I mentioned in the previous blog (below), Jesus is our source of strength.  So many times I want to err back to trusting in my obedience instead of trusting and resting in Jesus Christ, the very source of our strength.

The Nile water just keeps flowing continually – I saw it again today.  The source of our strength, like the Nile, is the riches of God’s grace, love and mercy found in His Son Jesus Christ!  How awesome is that?  It’s so awesome it gives a dead person LIFE that springs up eternally!

One of my biggest challenges as a person who thinks critically about things and ponders things is the love of Christ coming from the heart.  It’s crazy.  Did you know the word crazy is defined as, “characterized by weakness or feebleness, decrepit, broken, falling to decay, shaky; unsafe” (Webster’s 1913 dictionary – I love that dictionary because Webster used the Bible to define terms and saw his writing of the dictionary as a ministry)? Crazy!  Isn’t that you and I?  That’s us!!!

Love is a challenge to me because it doesn’t come naturally.  Selfishness comes naturally.  As Jesus has revealed more of Himself to me and more of His desires I think I understand love more, but it still fails to make logical sense.  For example, why would a holy and righteous God (who has absolutely nothing to do with sin) become sin so that I can have a deep, intimate relationship with a  holy, righteous God?  He imputes righteousness.  Love poured out to weak, feeble, decrepit, broken people is absolutely illogical, especially when it’s love from the true source of love, the very essence of love – Jesus Christ.  The power and strength of the universe loves the weak!  Simply illogical.

However, there’s something in me that connects when I see crazy stuff people do who love Jesus.  It’s like they’re obsessed with Him. 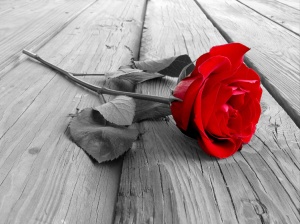 Here are some behaviors people have when they are obsessed with Jesus (borrowed from Francis Chan’s book, Crazy Love):

I mean really, do you not want more of that – to revel (to feast in a riotous manner) with God?  Do you not desire that intimacy?

This is beyond rigid rule and law-keeping!  This is love!

OK, this is sobering!  Except where Jesus is exalted – AWESOME!

So raw, I’m ashamed of what I’ve shared with Him.  But He’s BIG ENOUGH.

Not here yet.  Work in progress, waiting on Him.

Man, this is getting harder! 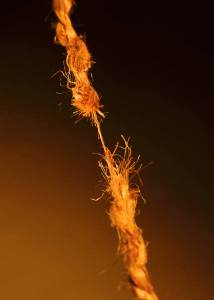 The apostle Paul prays for the Ephesians, “that you may know what is the hope of His calling” (Eph 1:18).  I think if we better understood and God more intimately revealed that the hope of His calling is confident expectation in the reality of His effectual (quickening, inward and invincible) call (from AW Pink), we would by His grace and power snap all cords of bondage that binds us, shrug off every weight of sin that ensnares us and run with joy – freely, crazy fast and determinately – toward the very One who saves us (Heb 12:2); a people obsessed with a goal; a people obsessed with a Person; a people obsessed with deep, unfailing, unconditional love.  It’s all about Him and He wants you and I to know we have eternal life now!  God gave us an entire epistle to tell us that (1 John 5:13).  Crazy!